Systematic Alpha Investments LLC purchased a new position in HCA Healthcare, Inc. (NYSE:HCA – Get Rating) during the 1st quarter, according to the company in its most recent 13F filing with the Securities and Exchange Commission (SEC). The fund purchased 3,238 shares of the company’s stock, valued at approximately $812,000.

HCA Healthcare (NYSE:HCA – Get Rating) last announced its quarterly earnings data on Friday, July 22nd. The company reported $4.21 EPS for the quarter, beating analysts’ consensus estimates of $3.67 by $0.54. The company had revenue of $14.82 billion during the quarter, compared to the consensus estimate of $14.73 billion. HCA Healthcare had a return on equity of 833.68% and a net margin of 10.83%. The company’s quarterly revenue was up 2.7% compared to the same quarter last year. During the same quarter in the prior year, the firm earned $4.37 EPS. As a group, equities analysts anticipate that HCA Healthcare, Inc. will post 17.05 earnings per share for the current fiscal year.

In other HCA Healthcare news, major shareholder Patricia F. Elcan purchased 325 shares of the stock in a transaction dated Monday, July 25th. The shares were bought at an average price of $198.66 per share, with a total value of $64,564.50. Following the completion of the transaction, the insider now directly owns 89,337 shares in the company, valued at approximately $17,747,688.42. The transaction was disclosed in a filing with the SEC, which can be accessed through this hyperlink. Corporate insiders own 1.50% of the company’s stock. 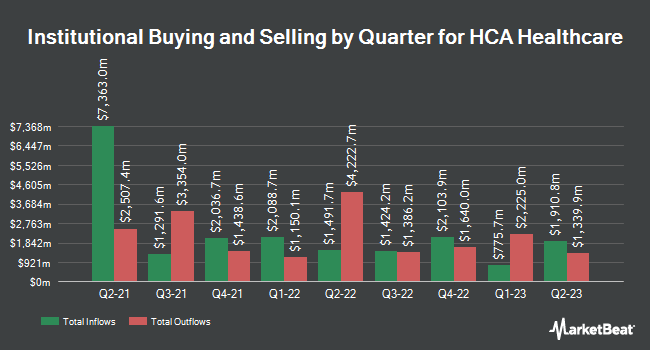 RamenSwap Trading Down 29.2% This Week

Complete the form below to receive the latest headlines and analysts' recommendations for HCA Healthcare with our free daily email newsletter: