The New York Times Company (NYSE:NYT) Given Consensus Rating of “Hold” by Analysts

The New York Times Company (NYSE:NYT – Get Rating) has been assigned an average rating of “Hold” from the nine research firms that are currently covering the company, MarketBeat.com reports. One analyst has rated the stock with a sell rating, four have issued a hold rating and two have given a buy rating to the company. The average 1-year target price among brokers that have updated their coverage on the stock in the last year is $36.93.

A number of equities analysts have issued reports on NYT shares. Morgan Stanley cut their target price on New York Times from $40.00 to $37.00 and set an “overweight” rating on the stock in a research report on Thursday, August 4th. StockNews.com initiated coverage on New York Times in a research report on Wednesday, October 12th. They set a “hold” rating on the stock.

In other New York Times news, Director David S. Perpich sold 6,478 shares of the stock in a transaction on Friday, November 18th. The stock was sold at an average price of $35.71, for a total value of $231,329.38. Following the sale, the director now directly owns 19,699 shares of the company’s stock, valued at $703,451.29. The sale was disclosed in a filing with the Securities & Exchange Commission, which is available through this link. 1.90% of the stock is owned by corporate insiders.

The company also recently declared a quarterly dividend, which was paid on Friday, October 21st. Investors of record on Monday, October 10th were given a dividend of $0.09 per share. This represents a $0.36 annualized dividend and a dividend yield of 1.02%. The ex-dividend date was Thursday, October 6th. New York Times’s dividend payout ratio is currently 34.95%.

The New York Times Company, together with its subsidiaries, provides news and information for readers and viewers across various platforms worldwide. It offers The New York Times (The Times), a daily and Sunday newspaper in the United States, as well as international edition of The Times; and operates the NYTimes.com Website. 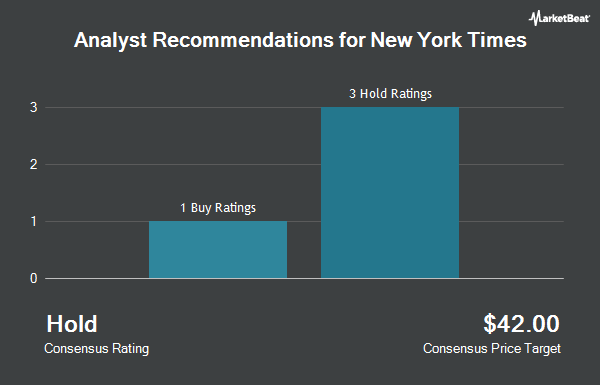 Complete the form below to receive the latest headlines and analysts' recommendations for New York Times with our free daily email newsletter: