General Dynamics (NYSE:GD – Get Rating) is scheduled to issue its quarterly earnings data before the market opens on Wednesday, January 25th. Analysts expect the company to announce earnings of $3.53 per share for the quarter. Parties interested in listening to the company’s conference call can do so using this link.

General Dynamics (NYSE:GD – Get Rating) last released its quarterly earnings data on Wednesday, October 26th. The aerospace company reported $3.26 earnings per share for the quarter, beating the consensus estimate of $3.16 by $0.10. The business had revenue of $9.98 billion for the quarter, compared to analyst estimates of $9.93 billion. General Dynamics had a return on equity of 18.96% and a net margin of 8.62%. The company’s revenue was up 4.3% compared to the same quarter last year. During the same period in the previous year, the company posted $3.07 EPS. On average, analysts expect General Dynamics to post $12 EPS for the current fiscal year and $14 EPS for the next fiscal year.

The company also recently disclosed a quarterly dividend, which will be paid on Friday, February 10th. Stockholders of record on Friday, January 20th will be paid a $1.26 dividend. This represents a $5.04 annualized dividend and a dividend yield of 2.14%. The ex-dividend date is Thursday, January 19th. General Dynamics’s dividend payout ratio is currently 41.97%. 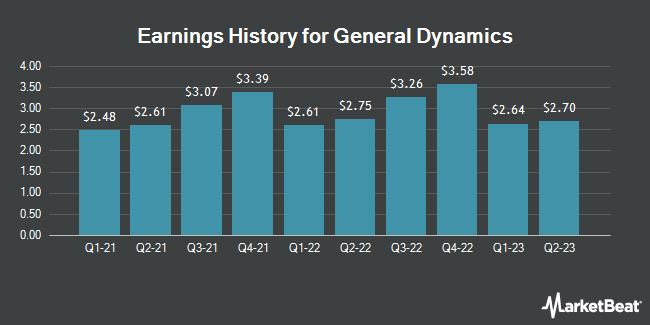 Complete the form below to receive the latest headlines and analysts' recommendations for General Dynamics with our free daily email newsletter: