Boehner All but Rules out Immigration Legislation 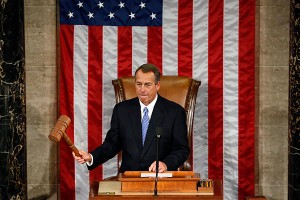 John Boehner the U.S. Speaker of the House was pessimistic over the possible passage of any immigration legislation prior to the midterm elections this fall.

The Speaker said it would be hard for the House, which is led by the Republicans, to act on immigration, which has been made a top priority of President Obama in his domestic agenda.

In his pessimistic comments, Boehner put blame for the stalemate on skepticism that is widespread that the President would properly enforce immigration reforms that were approved by Congress.

The leader of the GOP in the House did not mention that members of his own party have hesitated at acting on immigration, which could enrage the most conservative of voters in an election year.

Boehner said it seemed the president changed the law for healthcare at his own discretion and whenever he chooses. Now, he is telling everyone around the U.S. he will keep acting upon his own.

Last week, the Speaker and other Republican leaders in the House had unveiled some broad principles for changes in immigration, including the ability to gain legal status for 11 million undocumented immigrants, increased border security as well as a pathway to citizenship for the children who were brought into the U.S. illegally.

National Republicans feel failing to act on the immigration issue is a drag politically on the entire party following the presidential elections when their nominee Mitt Romney only won 27% of the vote by Hispanics. They want action to help the image of their party.

Those principles that GOP leadership endorsed this past week were considered a congressional jumpstart on the issue that has been sitting in the House since late June when the Senate passed its comprehensive bill that was bipartisan.

Republicans are also worried about the possible primary challenges coming from the right and the fear the new citizens of Hispanic dissent would add to the voter rolls of Democrats.