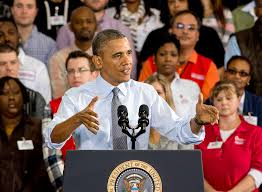 Democrats, including President Obama are attempting to use the annual meeting of the state’s governors in Washington to gain support for increasing the U.S. minimum wage, as their GOP counterparts argue jobs would be killed by increasing it.

Mary Fallin, a the GOP governor of Oklahoma is against increasing the minimum wage saying it would destroy jobs, especially those offered by owners of small businesses.

The annual meeting of the governors started on Saturday morning, but both parties started vying for position much earlier, as the Senate, which is Democrat-controlled prepares to debate a plan, backed by Obama to increase the minimum wage incrementally from its current $7.25 to $10.10 per hour by 2016.

Obama met on Friday with Democratic governors to build momentum. Obama said it was good policy and good politics, since the overwhelming majority of people in the U.S. think increasing the minimum wage is good.

However, Obama acknowledged that a great deal of his effort to address the inequality in income through higher wages has happened

The president said Americans deserved to have Congress vote on the issue. He praised The Gap a retailer that decided to pay employees higher wages.

Republican leaders seized upon a Tuesday report by the Congressional Budget Office, which is nonpartisan that found a wage increase could reduce the number of jobs in 2016 by a half million.

The report also stated that close to 45 million people in the U.S. would live below the country’s poverty line by 2016 if the minimum wage was not increased.

GOP governors, who met at a hotel close to the White House, suggested that increasing the wage was something better left to each state individually and the market itself.

Rick Snyder, the GOP Governor of Michigan would not say it he supported the proposal of Obama or not. He said his focus was on getting more jobs that paid more than just the minimum wage. He cited a program in his state that helps to create jobs that start at $11.50 per hour and new trade jobs paying over $55,000 per year.

Fallin added that she was not worried by any fallout politically in this year’s midterm elections for the Republican opposition to increasing the minimum wage.