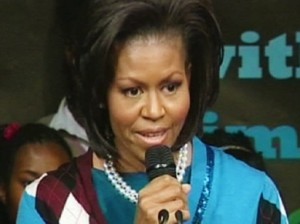 Michelle Obama the First Lady said on Saturday that studying abroad helped to build bridges of understanding. The comments from the First Lady came during a visit she made to a university in Beijing.

Obama said that studying abroad is about much, more than just approving the future of the student. It is about helping to shape the future of the countries of the world that everyone shares. The comments came at the Stanford Center located at Peking University.

Saturday was the third day of the First Lady’s first visit to China and her third trip outside the U.S. without her husband, President Barack Obama, since entering the White House.

Obama started her speech with some comments about the missing flight 370 from Malaysian Airlines saying we maintain thoughts of the loved ones and families of those on the flight.

Mrs. Obama said the relationships between different nations are not just between leaders and governments, but are about relationship amongst the people in particular the younger people.

Through learning the language of each other and showing curiosity and respect of the cultures of others, bridges are being built of understanding that in turn lead to much, much more, said Obama to an audience of more than 200 students from the U.S. and China.

Obama reviewed the announcement of her husband of 100,000 Strong, which is a 2009 initiative that is a national effort to help increase the number as well as diversity of U.S. students studying abroad in China.

Obama said that on the 35th anniversary of U.S. and China diplomatic relations the government of the U.S. supports more students from the U.S. in China that in any other country worldwide.

Currently China is the fifth most popular location for U.S. students studying abroad, said the First Lady. She added that the largest number of exchange students living in the U.S., are from China.

She called upon university students to continue to seek studies abroad.

Following her speech she took part in a video conference between Stanford University and Peking University in which students talked about how new technology and media have impacted education.