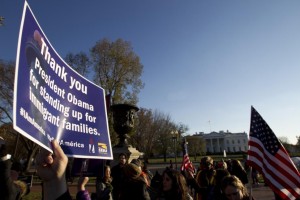 On Wednesday, President Obama vowed to do all that was necessary to defend his executive actions of recent to shield millions of the country’s undocumented immigrants from being deported.

While taking part in a town hall forum on immigration while in Miami, Obama said a recent ruling against his immigration policies by a Texas federal judge was incorrect and promised to use every legal option he had to ensure the new programs would be eventually adopted.

Expressing much confidence that the courts would side at some point in his favor, Obama urged the potential applicants to keep gathering all the required paperwork to prepare for the day the policy goes into force.

Obama took tough questions from some immigrants who said family members were facing deportation even under the lenient enforcement policies he had adopted. Obama defended that position in those cases by arguing that the executive powers he has can go only so far.

Obama also looked to alleviate the fears amongst the undocumented immigrants that applying to these programs could cause them to be deported. He said there would be isolated instances when officials from immigration have not received the message but he insisted there were consequences for federal agents if they ignore his new policies.

At issue now are two administration programs, launched in November by Obama to stop deportation and to allow the issuance of work permits for up to 5 million immigrants living illegally in the country.

Obama with his Democratic supporters said the president had the power to adopt the changes given the limited funding from the U.S. Congress.

However, Texas as well as 26 other U.S. states did not agree and sued the president for the alleged abuses of his executive power that they say would saddle their budgets with substantial new costs.

A federal judge last week sided with the 26 states and blocked the programs temporarily. The White House responded with an appeal and request for a court order to allow the programs to start while the appeal is considered.