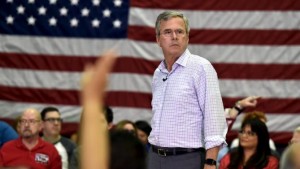 Demonstrators from Black Lives Matter interrupted an event of Jeb Bush in Las Vegas Wednesday, putting an end to the presidential candidate’s version of a town hall meeting.

As the Republican was busy wrapping up a session of questions and answers, the activists entered the town hall meeting with their fists raised and chanting black lives matter.

Some of the supporters of Bush responded by changing that all lives matter and that white lives matter, according to local media.

The former governor of Florida left just a few minutes later, shaking hands of his supporters on his way out the door.

Earlier during the evening, Bush had responded to one question about the criminal justice and education systems in relation to race.

Serious problems exist said Bush, and the problems have become worse over the past few years. Communities cannot trust any longer the basic institutions in today’s society.

He did acknowledge that racism existed in the U.S., but said there had been significant progress made on the issue.

The Republican presidential candidate also turned to his person education record in Florida. He said his record was one of empowering people in communities that had minority youth.

The former governor’s campaign said he met with advocates of Black Lives Matter privately before the town hall meeting where they had discussed upward mobility barriers in the U.S.

The GOP candidate has been hit with criticism for the way he has treated Black Lives Matter members.

In a town hall in New Hampshire during July, Bush dismissed the organization when responding to a question regarding Martin O’Malley’s apology due to saying white lives matter.

Members of the Black Lives Matter movement have disrupted a number of other campaign events by candidates for the White House across the nation over the past few months.

Last week, Bernie Sanders the Vermont Senator running for the Democratic Presidential nomination ended his event held in Seattle after the protesters took the stage over.

Hillary Clinton the frontrunner for the Democrats has taken notice of the group meeting with representatives of Black Lives Matter on Tuesday following them being barred from attending a Clinton forum on substance abuse.