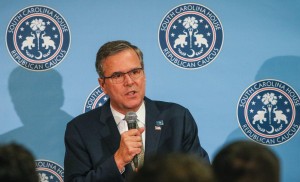 If Jeb Bush is elected as the president he would push for privatization of more healthcare for veterans, trim the Department of Veterans Affairs size  and make it easier to fire employees that are lower-level who treat veterans improperly.

The presidential candidate from the Republican Party unveiled his ideas for a healthcare plan for veterans on Monday as he started a two visit across South Carolina, the place with the largest percentage of retired and active duty military personnel amongst the first four primary states.

His rollout of the veterans plan comes after a focus for over a week on foreign affairs and security that included a speech that was closely watched outlining what he would do to confront the expansion of the terror group known as Islamic State.

Bush has faced criticism for having ideas too closely aligned to those of George W. Bush the former president and his brother, who to this day is widely faulted for his mismanagement of the Iraq war.

With the focus this week on the veterans, Bush is discussing specific proposals of policy and trying to shift the conversation in the GOP away from the surge by Donald Trump in the political polls and towards policy issues that are more serious.

Bush’s numbers in the polls have slipped nationally as well as in Iowa, while the lead by Trump has grown across New Hampshire. John Kacish the Republican Governor of Ohio has moved up to third place just behind Bush.

Bush started his trip in South Carolina Monday morning by meeting with veterans who support him. In that group was Anthony Principi who was the secretary of veteran affairs under Bush’s brother George and a veteran of the Navy.

A town hall meeting was scheduled for later on Monday at a Columbia VFW Hall. Bush said revamping the VA as well as the healthcare of veterans would be one of his top priorities if elected president. His ideas have mirrored those advanced in 2014 by a number of GOP lawmakers.