U.S. Deports Fewest Number of Immigrants in a Decade 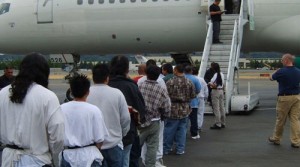 The White House administration deported the fewest number of undocumented immigrants the past 12 months since 2006, says figures from the government obtained by an International news agency.

The figures show that the deportations of immigrants with a criminal record have fallen to their lowest since 2009 when President Obama took office.

This is despite the president pledging to put a focus on finding as well as deporting the criminals that are living inside the U.S. illegally.

The total of more than 231,000 deportations does not include the immigrants caught at the border and returned quickly to their homeland by the Border Patrol.

The figure does not include the close to 136,700 convicted criminals deported over the past 12 months. Total deportations fell by 42% since 2010.

The Department of Homeland Security has not publicly disclosed the figures, which include breakdowns month by month and cover those periods from October 1 of 2014 to September 28 of 2015.

These new numbers have immerged as illegal immigration continues to be debated sharply amongst the presidential candidates of the Republican Party especially Donald Trump the front-runner.

In addition, they come during a period that Obama carries a pledge of before his re-election in 2012 to focus less on enforcement and slow down the number of deportations following close to one decade of rising figures.

The biggest shock to many in these figures was the decline in the number of criminal activities.

It is estimated that over 11 million immigrants currently reside in the U.S.

Obama has seen the removal of over $2.4 million immigrants since he took office. However, deportations have declined steadily.

Historically the Border Patrol sends home immigrants to Mexico without them every actually entering the country or being listed as caught. These people do not appear on any formal list of repatriated immigrants or immigrants found just across the border.