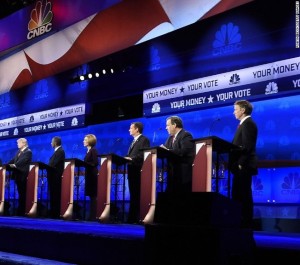 Following the third GOP debate in which the candidates seemed to spend too much time sparring with the moderators than with each other, the Republican National Committee chairman declared that CNBC, which hosted the debate, ought to be ashamed.

Reince Priebus the RNC chairman said one great thing about the GOP is there can be a dynamic exchange about the solution that will secure the country’s prosperous future and he will make sure that future debates allow for robust exchanges to take place more often.

CNBC in response said that the people who want to be the president of the U.S. should be able to answers questions that are difficult.

The main three moderators – CNBC’s John Harwood, Becky Quick and Carl Quintanilla – posed a number of points as well as at times contentious questions to 10 GOP candidates who took part in the third GOP presidential debate. The candidates were not afraid to show contempt either.

Ted Cruz the U.S. Senator from Texas said that the questions asked in the debate illustrated why the people in the U.S. do not trust members of the media. Cruz added that maybe there should be a talk about substantive issues.

Chris Christie the Governor of New Jersey pounced after Jeb Bush the former Governor of Florida was about gambling and fantasy sports.

Christie said are we actually discussing about getting the U.S. government involved in fantasy football. There is debt of $19 trillion, unemployed people, Al-Qaeda and ISIS and we are discussing fantast football.

Christie later crossed paths with Harwood a moderator. He asked Harwood if he really wanted him to answer his questions and said that even in New Jersey what you are carrying out is called rude.

A number of other candidates, including Ben Carson the former neurosurgeon and Mike Huckabee the former Governor of Arkansas also tangled with moderators.

When the moderator asked about Carson serving on the board of directors that promoted gay rights, Carson spoke back that the moderator knew nothing about his views on homosexuality.