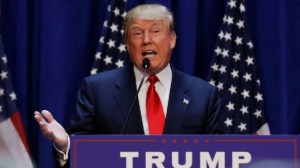 Donald Trump could be left out in the cold, or at least not let in.

A popular push to have the Republican presidential candidate banned from entering the United Kingdom will be debated by Parliament in the UK, said a House of Commons spokesperson.

The debate will take place January 18 at Westminster Hall where any Parliament member can participate.

A citizen’s petition online to ban Trump garnered over 568,000 signatures, which is far above the required threshold of 100,000 for a petition to be even considered for a debate. The petition has been active less than one month.

The petition says because the country banned the entry of people for making hate speech before, the same sort of principles should be applied to all who wish to enter the UK.

Last week, the government of the UK released a statement that reaffirmed that Theresa May the Home Secretary has the power to excluded any non-European Economic Area national if she believes their presence in the country is non-conducive to public good.

It was not clear whether the office would apply such criteria to Trump. The Home Secretary said that entering the UK was a privilege and not a right, the comment reads. She will be continuing to use powers available to prevent those people from entering the UK who seek harm to society and do not share the same values.

The Trump Organization released a prepared statement that specified its investments while also criticizing any move that may restrict his travel.

The statement said that restricting his travel would end current and all future Trump investments that are being contemplated in the UK.