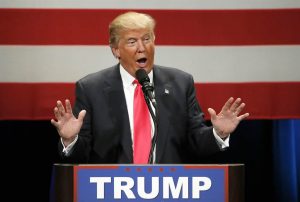 Donald Trump the Republican presidential nominee is facing problems in the suburbs of battleground states such as Pennsylvania, which could cost him those key states in the November election.

Trump has been caught up in a tight vice that he himself has created between those who see him as offensive and those that find him to be entrancing.

What he says and does that appeal to that latter group, which is predominantly white men, often times alienates many suburban voters, in particular women, who he desperately needs if he is to broaden his overall base sufficiently to win the election.

Both Hillary Clinton and Trump supporters seldom are close to one other in most of the country. Trump is dominating rural, white America, while Clinton is overwhelmingly in front in the cities with higher minority populations.

However, in the suburbs of many cities the two sides come to a head. Many voters in the suburbs do not agree completely with either candidate and are not even sure of whom they will finally vote for.

Trump has lagged behind consistently in the polls regarding the general election in many suburbs of the key battleground states such as Pennsylvania, where he does not just battle distaste with the way he is, but also demographics that aligned voters with the Democrats in each of the elections since 1998.

Over the past few decades, the population dropped in some suburbs in Pennsylvania out west while they increased in the eastern suburbs of the state.

The communities that represent the manufacturing industry might lean toward Trump and his cultural and trade arguments, but they have dropped in potency and have been replaced in strength by suburbs around Philadelphia that have become more aligned toward voting for Clinton.

With the population shift moving from west to east in Pennsylvania the state has become more moderate as the GOP has become much more conservative, setting up that disconnect, which had bedeviled the nominees of the party for six consecutive elections.

The most recent poll for the state showed that Clinton held a lead of 7 points amongst the likely voters. That gap was smaller than during August, but is larger than the gap President Obama held over Mitt Romney during the election in 2012.

Amongst women in Pennsylvania, Clinton is holding a lead of 10 points, while men are split down the middle. Even amongst white women, which is a group the Republicans usually hold Clinton is ahead by 7 points.