Conservative Site Only Media Outlet on Trip With Tillerson 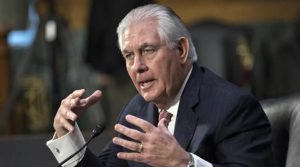 Rex Tillerson the U.S. Secretary of State is on a trip to Asia accompanied by just one reporter, a correspondent at the White House from IJR the Independent Journal Review, on online outlet that was founded during 2012 by former political operatives who are Republican.

In a prepared statement, the IJR announced on Tuesday that last week the U.S. State Department offered IJR reporter Erin McPike, a spot aboard the aircraft of the Secretary of State for his trip to Asia.

Officials from the State Department did not respond to the many requests made for comment on the reason an IJR reporter was invited to travel with the Secretary.

Previously, reporters covering the trip by Tillerson to China, Japan and South Korea were told by the State Department, he would not take reporters on his aircraft and that they would need to fly commercially, which broke decades of precedent that has been in place since Henry Kissinger was Secretary of State.

Complaints came in from major media organizations such as CNN, BBC, the Washington Post, Reuters and the New York Times.

McPike, who is an IJR correspondent at the White House and reported previously for Real Clear Politics, National Journal, NBC News and CNN joined IJR in February.

To date, no pool reports have been filed by McPike. Those reports are what reporters traveling with the Secretary normally file, as a way to inform colleagues not with Tillerson of actions or statements by the top diplomat of the U.S.

An IJR spokesperson did not respond to requests on whether or not McPike would be filing pool reports to her colleagues.

For a number of decades, the secretaries of state have almost always asked media to travel on their plane. In what are considered rare cases, particularly late in the tenure of a secretary some outlets declined invitations, such as the December 2016 trip by John Kerry to the kingdom of Saudi Arabia.

Republican top diplomats such as Alexander Haig, James Baker, George Schultz and Condoleezza Rice would routinely take 10 journalists or more on overseas trips, even when visiting conflict zone like Central America and Lebanon.

Through Tuesday, only hours prior to the scheduled take off of Tillerson, the State Department did not confirm if any reporters were flying with Tillerson.

News organizations traveling with officials from the U.S. pay the government for the cost of air travel, which means the reason given by a White House spokesperson that this was a cost cutting measure raised doubts.