Trump’s Back and Forth on Economics 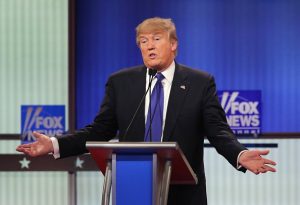 The economic policy announcements by President Donald Trump this week have been nothing short of back and forth, twisting and turning and flipping and flopping.

From the currency manipulation by the Chinese to his choice as the Federal Reserve head, Trump has contradicted statements he made while on the presidential campaign trail.

By doing so, Trump has departed from some of radical changes he once promised and has moved toward policy positions of those before him.

Up to now China was a target of his frequent barbs. Repeatedly during the election campaign, Trump accused China of manipulating its own currency.

Trump last year before the election said he would instruct his future treasury secretary to put a label of currency manipulator on China. In 2015, Trump penned an op-ed for The Wall Street Journal that was named, “Ending China’s Currency Manipulation,”

However, this week in an interview with the same WSJ Trump did a big about-face when he said China was not currency manipulators.

The new view Trump has of China has aligned him with the conclusion of the mainstream that China no longer manipulated its yuan to increase exports a number of years ago, or years prior to the statements made by Trump during his presidential campaign.

Former President Obama’s administration at times had called the currency in China significantly undervalued, but did never label the government a manipulator.

In addition, Trump this week reversed his opinion of the Export-Import Bank, which provides loan guarantees to finance exports from the U.S.

During his campaign he often complained that the bank did not support free enterprise because it unfairly subsidized exports from large companies such as General Electric, Caterpillar and Boeing.

However, this week Trump said he no longer wanted to eliminate the bank, which is a stance similar to what Obama took, who advocated for the bank.

Many believe that Trump has received many comments related to that matter from the different CEOs that have been invited to the White House.

Some see the move by Trump to policy views that are more mainstream as evidence of how the power has been taken from Steven Bannon and the ascendancy of Jared Kushner the son-in-law of the president.

Trump has also suggested that he might still reappoint current Federal Reserve chairperson Janet Yellen for another term.

He had said previously he would not do that. He accused Yellen of keeping interest rates low to help the Obama administration, but now says he would like them to remain low.