White House Tells Republicans They Will be Rewarded for Vote 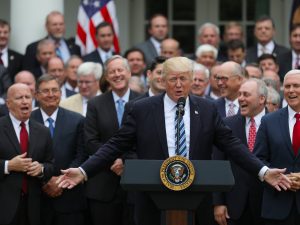 One of President Donald Trump’s top aides said that members of the Republican Party would be rewarded for what he called doing what is right by voting for overhauling a collapsing and failing healthcare system.

At the same time, Democrats as well as one or more outside groups have started to lay the groundwork for challenging the GOP for control of the U.S. House in the midterm elections of 2018.

Save My Care, which is a health advocacy organizations on Monday said it was launching a six-figure digital and television advertising campaign starting this week that targets 24 Republican members of the House who voted to repeal the Affordable Care Act enacted under former President Barack Obama.

However, chief of staff at the White House Reince Priebus does not believe the Republican will lose House control in 2018.

The chief of staff said the healthcare bill that narrowly made it through the House a week ago, and faces significant changes in the Senate is an improvement over the limited choice current system that has rising costs.

Priebus said sometimes you need to do what is right not politically expedient and we are doing what is best for the people and get it done. He added that he believes the Republicans will be rewarded for what they are doing.

Paul Ryan the House Speaker from Wisconsin said he is not concerned over possible political fallout due to the vote.

The speaker said the Republicans were keeping their word and people expect their elected officials to do what they promise in their campaign and that is what the GOP is now doing.

Ryan also argued that disaster for the Republicans politically would take place if they go back on their world.

California Democrat Nancy Pelosi who is the Minority Leader in the House was happy at the thought of reclaiming the gavel in the House in 2018. She told Republicans they would glow in the dark because of last week’s vote.

The party that is in the White House normally loses some seats in the House and Senate during midterm elections. Unknown however is 18 months prior to the election, is how the vote for the healthcare bill could complicate matters.

Amongst the Washington lawmakers that will be targeted in the campaign by Save My Care is New Jersey’s Tom MacArthur a moderate Republican who was responsible for reviving the measure.

He wrote a new amendment to the bill that satisfied lawmakers’ worries over how the new measure would treat those people that have pre-existing conditions.