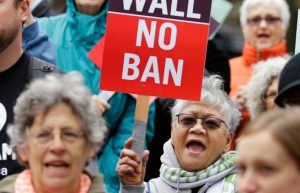 On Thursday, a federal appeals court left the freeze on the revised entry ban by President Donald Trump in place, handing the White House administration another setback in court in its ongoing efforts to block new visa issuance to citizens of six nations that have Muslim majorities.

The broad and decisive ruling handed down by the U.S. Court of Appeals means the White House administration cannot enforce its travel ban, which it says is needed in an urgent way for the country’s national security.

Jeff Sessions the Attorney General said he would appeal the ruling all the way to the Supreme Court.

In a decision of 10 to 3, the court, based in Richmond, Virginia, said the power to deny entry by the president is not an absolute one and it sided with the order’s challengers, finding that the ban in context is full of animus, discrimination and religious intolerance.

The court added that the authority of the president cannot be unchecked when the president wields it via executive edict that could cause irreparable harm to people in the U.S.

The order by the Fourth Circuit leaves an injunction that is nationwide in place. The ruling on Thursday means that citizens from Sudan, Somalia, Iran, Libya and Syria are allowed to continue entering the U.S.

Even if the ruling by the appeals court sided with the White House administration, the executive order would have been kept on hold due to a separate opinion from a judge in Hawaii.

For the ban to be put into motion, the Department of Justice would have to also win in a San Francisco Court of Appeals, which heard arguments May 15 in the appeal by the government to the decision by the judge in Hawaii.

However, the ruling was the most recent in a number of defeats for the new White House administration. Trump revamped the entry ban following the refusal by a court in February to lift its injunction against the original travel ban he wrote.