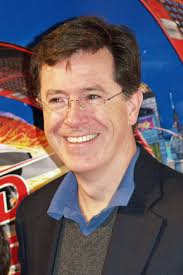 The popular comedian gave the keynote closing speech at the RSA conference. He ignored requests by some privacy activists and members of the community of cyber-security to not take part in the conference.

A number of speakers about security dropped out of the conference after it was reported by a worldwide news agency that RSA in December had a contract that was undisclosed for $10 million with the National Security Agency, to build a back door into encryption software for the U.S. governmental agency.

Some of those protesting the RSA conference held a counter-conference on Thursday called the TrustyCon. Protesters passed out information that was anti-NSA outside the location of the conference in San Francisco.

Though Colbert is not an expert on security, his reaction was watched closely by those not in the community. RSA closes it conferences that are a week in length, with big-name speakers that are generally from the political sector. Bill Clinton, Tony Blair and Condoleezza Rice have all give the keynote at prior conferences.

This year Colbert was hired and some called for the host on television to boycott RSA’s event. Fight for the Future, a privacy group started a petition online asking that Colbert not take part.

He questioned if it was right to boycott the RSA conference when other major companies like Microsoft, Verizon, Yahoo and Apple were all linked at some point to NSA.

He joked that as a lover of freedom, he did not take part in boycotts.

Colbert gave the RSA a pass, but he was not easy on Edward Snowden or NSA. He called Snowden close to a war criminal for taking intelligence to both China and Russia.