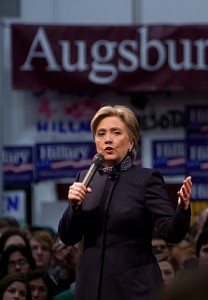 An organization founded to help prod former Secretary of State Hillary Clinton into seeking the White House announced on Thursday it had raised over $1.7 million during the first three months of 2014.

Ready for Hillary, a super PAC is one of several groups laying out the groundwork for the potential campaign for Clinton. The Ready for Hillary group in all has raised more than $5.8 million from over 55,000 donors with nearly every donation $100 or less.

While many efforts that are pro-Clinton have focused on donors with deep-pockets and building a quick response operation to counter attacks by Republicans on Clinton, this super Pac is using money to build a national data file on voters, recruiting volunteers and organizing in early electoral states like Iowa, a place where Clinton’s 2008 loss dealt a huge blow to her first bid at the presidency.

The groups limits donations to just $25,000 and collects funds in many different ways including  a fundraiser for gay and lesbians on Monday that had a cost of just $20.16, a lobbyist hosted fundraiser and a campaign using direct mail.

All this has come while Clinton the former U.S. senator, first lady and Secretary of State is traveling the country delivering speeches and preparing for the release of a book in June while weighing whether she will make another bid for the U.S. presidency.

On Tuesday, Clinton said he was thinking about running during a San Francisco speech. However, she said she wanted to think more about it before announcing her decision.

She said she was enjoying her regular life of taking long walks, visiting with friends and playing with her dogs. Clinton said that she would first speak to many people around her before making her final decision on if she would run or not for the Democrats.