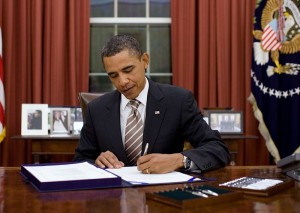 President Barack Obama commuted the sentence of a man convicted in a drug related case who was mistakenly sentenced to an additional 3 ½ years of prison due to typographical error, said White House officials.

Caesar Huerta Cantu who is from Katy, Texas had pleaded guilty 8 years ago in Virginia. He had been charged with money laundering and possession of marijuana with the intention to distribute.

However, a mistake typed in his pre-sentencing report – number 36 was typed instead of 34 – defined Cantu’s offense as more serious that under the sentencing guidelines.

Due to that, he had his sentence increased by another 42 months, said the White House. When the error was finally discovered, a judge ruled it had been too late to correct through normal means, which meant the only remedy was the President.

An official from the White House announced that the sentence commutation by President Obama only corrected that typographical mistake. The action by the President reduced the convict’s sentence to just 138 months.

The clemency power given to each sitting President has not been used often by Obama. It is unusual for the president to announce action for one individual rather acting upon a bigger group all at one time.

In December, he announced that 21 people had received clemency including 13 individuals pardoned and 8 who received commutation of their sentences.

Only 61 people over a period of 5 years have been granted clemency by President Obama out of over 12,000 petitions the Justice Department has received. That is the fewest number out of any president in the modern era.

Quite often, a president will rule on a larger number in his final year of office before leaving in January when another president is sworn in. The clemencies usually are handled very quietly with no fanfare as they can cause controversy for some.