Rick Perry: Young Border Crossers are Only Side Issue 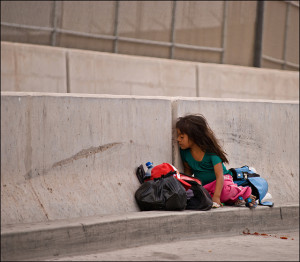 As immigrant children continue crossing the U.S./Mexico border, dominating the debate on immigration this summer, Rick Perry the Governor of Texas says it is nothing but a sideshow.

He maintains that the real issue at the U.S./Mexico border is the large number of criminals that have crossed into the U.S.

On Meet the Press Sunday John Thune the Republican Senator from South Dakota said that Washington politicians must deal with this crisis immediately, referring to the border crossing by the children.

However, Perry on CNN, said the influx of minors who are unaccompanied that are crossing is a side issue.

A number of politicians said the more than 62,000 minors who are unaccompanied that have crossed the border into Texas amounts to a humanitarian crisis.

The situation has overloaded the holding facilities and taxed the entire immigration system, costly the taxpayer millions of dollars.

At the same time, Perry, said he is much more concerned with the criminals crossing the border, which he called porous.

The real issue said Perry is one often times deflected by the unaccompanied minor conversation.

Border crossing criminals is a Perry theme that he has hit on since late July when he announced he would send 1,000 troops from the National Guard to help stop crime at the border.

On Sunday, he restated his position during an interview on CNN, saying the state was continuing to do what it has to, to keep the residents of Texas safe.

He said criminals that have crossed the border into the U.S. illegally since 2008 are responsible for more than 3,000 homicides and as many as 8,000 sexual assaults.

However, a research firm fact checked Perry’s statistics and concluded the statement he made was both ridiculous and incorrect. However, Perry stands behind his statistics.

The crime stats by Perry have been debunked, as the rate of crossings at the border by undocumented immigrants is the lowest since the 1980s.

The majority of other politicians have been focused on the issue of twice as many children are crossing into the U.S. in 2014 than did in 2013.

Perry’s term is up at the end of this year and he is thinking of running for the presidential nomination for the Republicans in 2016.