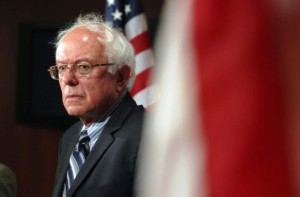 Senator Bernard Sanders from Vermont made his biggest push yet toward a presidential bid in 2016 on Sunday while appearing on Meet the Press for the first time, between a series of political speeches over the weekend in Iowa, the earliest caucus state.

The independent Senator said during a television interview in Washington, D.C. that he thinks whether people are conservatives, moderates or Democrats there is great anger in knowing that the country’s middle class is quickly disappearing and that millions work longer hours and receive low wages.

Sanders added that he believed any candidate that speaks to the middle and working class needs in the country and shows courage to go after the billionaire class would do well.

Sanders told the television audience on Sunday that he was thinking of running for the presidency and was spending time in Iowa to have a sense of how the public thought about it.

The Senator said that he was still an independent, but it was hard to establish a political infrastructure across 50 states that was outside the current two-party system.

It was then asked if he might challenge Hillary Clinton for the presidential nomination for the Democrats, if she were to run.

He replied that he did not know if she was running. He said the issue was not Hillary. He said he has known her for many years and has great respect for her.

He returned to the middle class theme and said it was collapsing in the U.S. and the gap between rich and poor was growing even wider.

He mentioned the profound anger many have about the greed that is on Wall Street and in corporate America as well as with the media and the political establishment.

Sanders added that he knew the people in the U.S. wanted real change and he has taken on special interests and big money interests his entire political career.

Sanders explained that at a time of many people having experienced a decline in the standard of living, when the country’s wealthiest individuals and its largest corporations are going great, they want change.