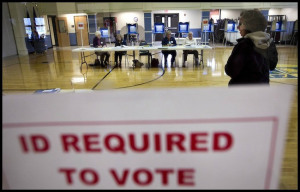 Wisconsin has been given the okay to enforce its new law for voter identification in the upcoming election in November, said a federal appeals court on Friday.

After listening to arguments from both sides on the issue early Friday, a panel of three judges from the United States Court of Appeals in the 7th Circuit unanimously stayed an order from a district court judge blocking the new law’s enforcement or any measure similar imposing new requirements for voter identification.

The panel of three said after reading briefs and listing to oral arguments, the court stays the injunction the district court issued. Wisconsin can, if it so wishes and if appropriate under state law, enforce the requirement of photo ID in the elections this November.

The district court had said the law was invalid and stopped its implementation even though materially it was identical to the photo ID measure in Indiana, which the Supreme Court ruled valid in 2008, added the three judge panel.

The state asked the court of appeals to lift the order by the district judge, arguing that it had been overbroad. Advocates of civil rights challenging the law could ask for a form of relief from the 7th Circuit or the U.S. Supreme Court.

On Friday, the appeals court announced that a ruling from the Supreme Court of Wisconsin in July had narrowed the new measures in ways making it less likely to create a negative impact towards minorities.

The move is considered a rebuff to the White House, which had filed an amicus brief back in July that urged the court of appeals to uphold the ruling of the lower court.

Technically, the panel from the appeals court did not make a decision on the case on Friday, but simply stayed an order by a lower court pending the complete resolution of the law.