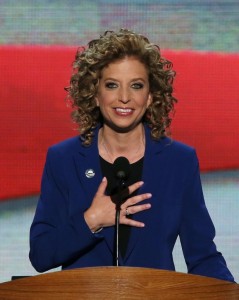 Debbie Wasserman Schultz the Democratic National Committee Chairperson is struggling behind the scenes with the White House.

Washington insiders and congressional Democrats have apparently lost confidence in Schultz as a both a reliable spokesperson for the party and a unifying leader at a time when she is needed most.

Doubts that have been long simmering reached their peak following two recent mistakes in public: first criticizing the handling by the White House of the crisis at the border and then comparing members of the tea party to wife beaters.

The thought by critics is the DNC Chair spends too much energy minding her own ambitions in the political arena than she does helping fellow Democrats win.

That includes using meetings with donors to the DNC to ask for contributions to her campaign committee and PAC, traveling districts that are uncompetitive to court colleagues in the House for her possible leadership bid and having staff that is paid by the DNC to focus on her personal agenda in the political arena.

Critics complain she is a liability now to both the DNC and her own chances.

One major donor said it did not seem Schultz was losing any duels but she kept shooting herself in the foot prior to even taking the gun out of her holster.

The worry is the stakes are very high. Wasserman Schultz is a national figure with a high profile, who has helped raise large sums of money and served as a messenger for Democrats to the female voters during the presidential election where President Obama needed to exploit gender to win. However, the already difficult November midterm elections are growing near.

One example pointed to by sources, as being particularly troubling is that Wasserman Schultz has repeatedly tried to have the DNC cover costs for what she wears.

In 2012, she attempted to have the DNC pay for the clothing she wore in Charlotte at the Democratic National Convention, said multiple sources. However, that was blocked by the Capitol Hill committee’s headquarters.

She attempted the same thing again close to the inauguration of Obama in 2013 pushing so much that senior adviser to Obama, and a onetime booster for Wasserman Schultz, Valerie Jarrett was required to call her directly to have her stop. However, Jarrett when asked said she cannot recall that conversation.