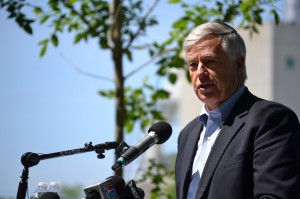 A gubernatorial candidate from Maine who is a Democrat has come under fire from the Republicans for his promotion of a video that has a rap song, which makes a sexual reference to Senator Susan Collins who is a Republican.

Michael Michaud’s campaign insists it did not pay or oversee what the contents of the controversial video were and has lashed back at Republicans for making an issue out of it.

However, the trouble began after the video was retweeted by Michaud.

In the video is a song by Spose a local rapper. The lyrics of the song includes one line that says I am the King of Maine and have I have Susan Collins giving everyone brain, which is a slang for referring to oral sex.

Late last week, the Republican Party in Maine denounced the contents of the video and demanded an apology from Michaud to Collins and to all women in Maine for endorsing the video.

The Republican Party spokesperson for Maine said it was both appalling and inexcusable that Michaud would have a video made like that, that has such a vulgar reference to one of Maine’s senators.

The spokesperson added that in Michaud’s quest for votes he went well over the line by being a participant in an insult to a senior senator from Maine.

However, the election campaign for Michaud says it was not aware of the meaning of the lyrics and since has asked the company that produced the video to take is down.

While the GOP in the state claimed the video had been a collaboration with the campaign of the Democrat, Michaud has denied that it was.

Michaud tweeted that his campaign did not produce the video and did not have control or knowledge in advance of the contents.

Michaud campaign with its allies are accusing the Republicans of using gutter politics for creating an issue from it.

The latest polls show that current Governor Paul LePage is in a tight race with Michaud with the election less than two months away.