Hagel Resignation Shows Power Has Been Take from Pentagon 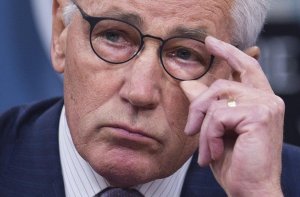 Sources close to the White House have said that Chuck Hagel the Defense Secretary was pushed out of office by President Obama on Monday after only 21 months due to disagreements over Syria and Iraq policy.

Hagel, who grew increasingly frustrated with the tight management of policy by the White House, was ready to leave, said one official in the defense department. He resigned with no fight.

The departure of the Vietnam veteran spotlights how one of the most powerful jobs in Washington, overseeing the strongest military in the world with a budget of over $600 billion, has faded in the era under Obama.

The strict control by the White House under Obama often left Hagel as well as other members of the Cabinet with little autonomy and authority.

Like his predecessors Leon Panetta and Robert Gates at the Pentagon, Hagel was not pleased with the way just a small group of Obama loyalists had centralized the power of the White House.

When Obama backed away from his threat of bombing Syria in 2013, he made his decision walking with Denis McDonough his chief of staff. Hagel, at a later time, was told of Obama’s decision.

Hagel and aides at the White House had such tension between them, said one official that Hagel would often times phone Obama following meetings to make sure his voice had been heard.

Now, the White House has the challenge of finding Hagel’s successor. This will not be easy as the person will take on a relatively weak position and must be content to avoid any dissent.

The replacement will have the daunting task of changing the Pentagon although there is little time under Obama left to do so.

Republican Senator John McCain from Arizona said that Hagel had been frustrated with aspects of the national security policy of the administration and the process of decision-making.

McCain added that Hagel’s predecessors had spoken of excessive micromanagement that was faced from the White House that made it difficult for them to perform their jobs in a successful manner.