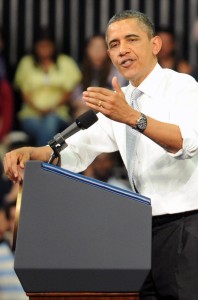 Under the sweeping action by President Barack Obama on illegal immigration, businesses will reportedly have an incentive per employee of $3,000 to hire undocumented immigrants.

Because of an ObamaCare glitch, businesses will not be facing a penalty for not providing the immigrants any health care, reported a national newspaper.

Undocumented immigrations are not eligible for any public benefits like purchasing health insurance on health exchanges for ObamaCare.

Congressional aides have condemned the loophole by saying it has put the undocumented immigrants before U.S. citizens in the hunt for employment.

Lamar Smith a member of the House of Representatives from the state of Texas said that if the report were true about the president offering employers an incentive of $3,000 to hire undocumented immigrants the president has added insult to injury.

Smith added that this move, if true, moved undocumented immigrants ahead in line before the underemployed and unemployed Americans.

Obama while fighting hecklers this week in Chicago, praised the contributions that immigrants have given to the U.S. Obama said it was imperative that the United States acted now to make changes to an immigration policy that is broken.

He cited different studies that showed immigrants open 25% of all new businesses in the U.S. and 40% of the companies in the Fortune 500 were founded by an immigrant, immigrants or their offspring.

Obama added that being a country of immigrants allows us a huge advantage entrepreneurially over many nations.

The executive action Obama took could give close to 5 million immigrants, authorization to live and work in the U.S. legally.

At issue though is the extent of the execution actions taken by Obama. The measure applies to those with a son or daughter who are citizens of the U.S. or legal permanent residents.

The parents need to have been living in the U.S. for the past five years. Obama expanded the program that extends protection from deportation to those immigrants who were children when they entered the country illegally.

However, in what some activists in immigration called a blow, Obama did not give any protections to those parents of young immigrants known as Dreamers.