GOP Governors Readying Themselves for 2016 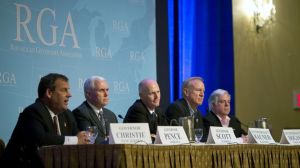 Six potential presidential contenders from the Republican Party spent last week walking across the grounds of a luxury resort speaking with donors and sizing up competition in the biggest field for the party in decades.

Rarely did they criticize one another when in public, but subtle jabs were common.

Within just hours of Chris Christie the Governor of New Jersey appearing on the cover of a magazine kissing a baby’s head, Bobby Jindal the Governor of Louisiana suggested the party did not need showmen but leaders.

Jindal said the party had enough politicians who want to be celebrities, cut ribbons and kiss babies.

Whether that had been an intentional barb at Christie or just a coincidence the looming presidential election in 2016 changed the context of each interview, speech as well as panel discussion during the Republican Governors Association’s yearly conference.

The summit in Boca Raton, Florida was like a first test run for what likes to be a tough, no holds barred showdown for the presidential nomination of the GOP amongst over a dozen possible contenders including a group of governors.

In stark contrast, Hillary Clinton has been spending recent weeks enjoying the glow of being a grandmother and the applause received at a few events – without a major challenger, should she pursue the idea.

While the possible GOP field appears to be stronger than it did in 2010, the Republicans do not have a frontrunner.

One political analyst said that the GOP had as many as 16 people who might run. The analyst downplayed a risk of all of them running and dividing the party.

The candidates are not expected to make any formal declaration of their intentions before the first quarter of 2015.

However, the tensions developing are already apparent with five potential presidential candidates appearing together on a Boca Raton stage to answer questions.

Rick Perry the Governor of Texas said the race was already on, as issues are already being discussed that will impact the 2016 presidential election.