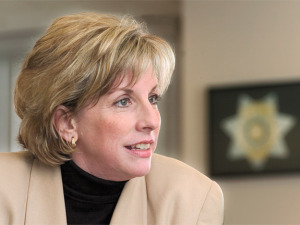 Sue Rahr who helped steer the police academy in Washington state from its traditional military training has been named to the task force set up by President Obama to build trust between communities and police across the country.

Rahr, a former sheriff, took over as the Washington State Criminal Justice Training executive director in 2012, captured a great deal of attention for moving the academy away from fashioning warriors through a military mold to training community guardians.

In a prepared statement, Rahr said she was honored to be given the opportunity to serve her country and contribute to helping build the public’s trust in law enforcement.

Rahr is to join the task force of Obama of 21st Century Policing, which was created following the nationwide protests over recent decisions by grand juries in Staten Island, New York and Ferguson, Missouri to not indict police officers who were white in the deaths of two men who were African-American.

A task force of 11 has been requested to present its report and recommendations by the end of March to help foster the relationship between the public and police and lower crime. Its first meeting will be held in mid-January in Washington, D.C.

Obama, who on Thursday created his task force by signing an executive order, selected the Philadelphia police commissioner Charles Ramsey and criminology professor Laurie Robinson from George Mason University who served previously as the assistant attorney general for the Justice Department, as head of the new group.

Plans, for the task force, were described on Thursday by a senior adviser at the White House.

The White House said the problems would not be solved overnight or prevents events that are controversial from happening.

Amongst others that were named to the new task force was Connie Rice an attorney who specializes in civil rights.

She helped Los Angeles get through a consent decree with the Department of Justice that addressed police abuses.