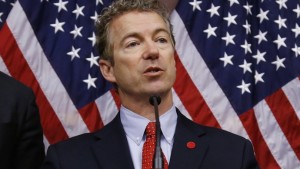 Senator Rand Paul from Kentucky has officially declared his candidacy for the 2016 Republican presidential nomination. He promised on Tuesday in front of a huge crowd of supporters that he was ready to give Washington a shake up and disprove even his own party members that a strong libertarian conservative can become a strong contender.

Paul said that the Washington machine that takes away freedoms and invades all the nooks and crannies of our lives needs to be stopped. He added that he wanted to be part of the return of prosperity.

Paul said he became an eye surgeon after his grandmother lost her vision. He scolded both Democrats and Republicans for failing the American people.

Paul sought to push away criticism that he was an isolationist and potentially weak when it came to defense.

Regarding the negotiations over the nuclear program in Iran, Paul said that any deal reached must be approved by the U.S. Congress.

He said he would be opposed to any deal that did not end the nuclear ambitions of Iran and that did not have strong measures for verification. He added that he would insist that any end version would be brought in front of Congress.

Loud cheers followed Paul’s criticism of President Obama’s program of domestic surveillance, arguing that the U.S. has compromised its liberties in exchange for false sense of security.

Paul explained the positions he has on economic policy, explaining that poor cities should be beneficiaries of economic freedom zones and that jobs in manufacturing could be created through lowering taxes for U.S. companies that return profits from overseas to America.

Paul is now the second member of the Republican Party to enter the campaign for 2015 following the announcement of Texas Senator Ted Cruz last week.

However, the field will not remain small for very long. Marco Rubio a Republican Senator from Florida is thought to be readying his announcement for his candidacy for next week.

In addition, also readying announcements for their candidacies are Jeb Bush the former governor of Florida and Wisconsin Governor Scott Walker.