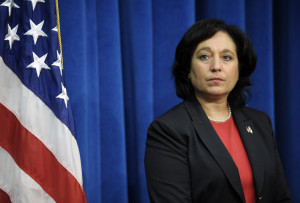 On Tuesday, the Department of Justice announced that that Michele Leonhart the embattled chief of the Drug Enforcement Agency would step down, following the controversy over DEA agents attending sex parties. The DEA agents had been stationed overseas.

The news of Leonhart’s departure came following a series of episodes where she found herself at odd publicly with senior officials in the administration including President Obama.

In a prepared statement, Eric Holder the Attorney General said that Leonhart was retiring in May and he described her as a public servant and trailblazer. He did not mention the incident that led to some members of Congress to call for her to resign.

Leonhart has been the leader of the DEA since 2007, first in an interim basis and then a confirmed appointee since 2010. The White House used more direct language in acknowledging its dissatisfaction with the tenure of Leonhart.

The Press Secretary for the White House declined on two occasions of recent to say if Obama still had confidence in the DEA chief following the report by the inspector general of the Justice Department which said a certain number of DEA agents had attended repeatedly sex parties that had prostitutes paid for by drug cartels in Colombia.

The report indicated that the agency had treated the incidents as minor and they were not reported to the headquarters of the DEA for investigation. The IG report also said that DEA personnel were not forthcoming initially with the record related to those episodes.

After the retirement of Leonhart was announced, a spokesperson for the White House referred to earlier comments made by the Press Secretary. A contingent of 20 bipartisan lawmakers issued their own statement last week that said they did not have confidence in Leonhart.

Peter Bensinger a former DEA Administrator said that Leonhart had run into disfavor in the administration for not endorsing the statement President Obama made that marijuana was not as dangerous as using alcohol.

Bensinger said it was nothing more than politics and that Leonhart deserved better.