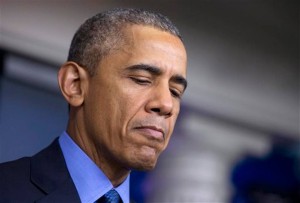 On Thursday, President Obama expressed some hope that the U.S. would eventually strengthen the laws for control. However, he was also quick to say he expected little progress during the current political environment even though there are mounting numbers of shootings taking place.

Speaking very candidly about the massacre of 9 African American church members in Charleston, South Carolina, the president said he had to address the episodes of gun violence far too many times during his presidency.

Obama looked weary eyed when he seemed to concede on Thursday that a solution for gun-control to the problem would come lost likely far after he has already left office.

He said that the point will come when was as a nation will have to reckon with the truth that the type of mass violence does not happened in other countries that are advanced.

Obama noted he has dealt with this type of thing too many times while the president.

He suggested it was in the hands of the people to do something regarding gun violence and added that he recognizes that the politics in Washington close many of the avenues to do something at this time.

He said he and the first lady knew members of that Church and the two of them knew Rev. Pinkney, who along with 8 others, had gathered in fellowship and prayer and were murdered. To say we are thinking of them and praying for them is not enough to convey how much heartache, sadness and anger we feel now.

President Obama added that any death of this type is a huge tragedy. Any shooting involving multiple victims is tragic. There is something heartbreaking about death taking place in a place where we seek solace, peace and a place to worship.

The latest news of the killings say the gunman wanted to create a race war with his killings.