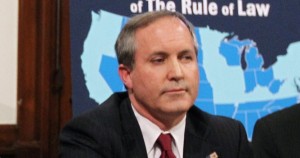 Ken Paxton the Attorney General of Texas defended state employees religious liberty on Sunday with a statement saying they would not have to issue any marriage licenses or perform any weddings for same sex couples. He called the ruling Friday by the Supreme Court a lawless one.

While critics have seen this as political posturing that will last only a short period, some conservatives see this as the start of the right’s of the state to move against the high court’s decision on gay marriage.

In the Obergefell vs. Hodges case, the high court made a 5-4 decision declaring that same-sex marriage is a constitutional right. However, AG Paxton said that the ruling stoops at the door for the First Amendment and cannot get near religious freedom.

Paxton added that lawyers were going to be available to anti-same sex marriage officials who could face legal consequence for actions that are motivated due to religion.

Paxton’s condemnation of the court’s decision echoes similar remarks by Greg Abbott the Governor of Texas who is Republican and said on Friday that no adverse action would be taken against any state officials acting or refusing to act due to their religious beliefs.

Abbott said that Texans of any faith must understand that their religious freedoms are far beyond the reach of our federal government.

In Louisiana, state officials will not grant marriage licenses just yet to same sex couples. The Louisiana Clerks Association advised its members to wait united the 25-day period ends for the high court to consider another rehearing. In 2004, voters in the state approved a constitutional ban on marriage that involved the same sex, which was upheld by a federal judge in 2014.

In Mississippi, Andy Gipson the judiciary chairman of the house said the state might remove the marriage license all together due to the ruling.