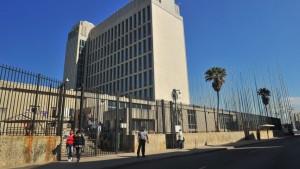 Cuba and the U.S. reached an agreement that will restore full diplomatic relations and will reopen embassies in both countries, said a senior White House officials on Tuesday. This is the biggest step towards ending more than 50 years of disaccord between the two nations.

On Wednesday, President Obama will tell the U.S. of his plans that the U.S. will reopen its Havana embassy, said the official. This will culminate an aspiration of his presidency and will represent the end to a Cold War vestige over 25 years after the Berlin Wall fell.

John Kerry the U.S. Secretary of State will fill in all the details about the diplomatic post to be in Havana. The diplomatic post now is referred to as the U.S. Interests Section and will now become a complete embassy, said officials.

Kerry is expected to travel to Havana during July to oversee the reopening of the embassy.

Four rounds of negotiating were needed before an accord was reached between the two countries. The last was in May in Washington. Cuba late in May was removed from a list of state terrorism sponsors by the U.S., which was one of the most critical steps in restoring full diplomatic ties.

The announced expected on Wednesday would be the biggest development to date to come from the change of policy in the U.S. in Cuba. While Obama has taken many unilateral steps to push forward ties with Cuba. Including taking them off the terrorism list, this most recent move came following bilateral conversation.

Officials in the White House administration see his diplomatic ties reestablishment as a first step to a much longer normalization process.

Congress must act to completely remove the trade and travel embargo that was put in place during the early 1960s.

The U.S. State Department must notify Congress formally of the intent to reopen its Havana embassy. Congress then has another 15 days to look over the notification prior to the U.S. formally opening it.

Officials in the U.S. said the formal notice to Congress and the notice to the public would be done together.