Putin Has Reportedly Spoken Twice to Obama about Global Concerns 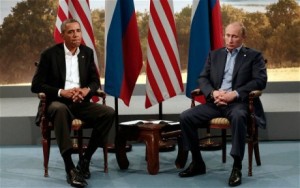 Vladimir Putin the President of Russia sent President Barack Obama a congratulatory message for the Fourth of July and expressed his confidence that their countries could work together on different global issues that include terror threats.

In his congratulatory message, Putin noted that even with differences between them, the relations between them remain one of the most important factors of security and stability internationally, said the Kremlin in a statement Sunday.

The countries, two world powers that are frequent rivals, have been at odds with one another since the Ukraine uprising that resulted in Russia annexing the Crimea region of eastern Ukraine last year.

The U.S. and its Western Allies imposed economic sanctions following that on Russia. However, the two countries are working together closely in a new coalition of world powers referred to as the P5+1 negotiating to keep the country of Iran from making a nuclear weapon.

Talks to come to a final deal resumed in July in Vienna. The relations between Russia and America remain the biggest factor in international security and stability Putin said to Obama according to a report by an international news agency.

It is not clear exactly how or when Putin had contacted the president. The two spoke last month by phone, however the frequent exchanges recently will likely not be considered any significant breakthrough in negotiations considering that Putin is purported to have made a similar gesture last July.

The Obama administration said following the call on June 25 that the two president’s conversation focused on the Ukraine situation and also included the Iran nuclear negotiations, the need to stop the terror group Islamic State and the dangerous situation taking place in Syria.

President Obama also reiterated to Putin the need for his country to fulfill the commitments made under the Minsk agreements for the removal of all Russian equipment and troops from all Ukraine territory said a spokesperson for the White House.