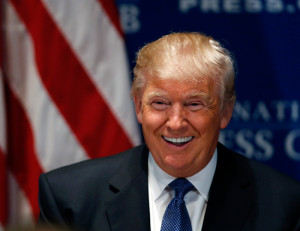 With just three days before the first Republican debate, Donald Trump finally started to reveal what his White House administration would focus on if he were to be elected in November of 2016.

On Monday, Trump said that his first few items on the agenda if he were elected would be to increase the strength of the U.S. military and to eliminate the Affordable Care Act of President Obama.

Trump said that the United States is currently a mess and there are many, many things that need to be done. He said he wanted to build the military up so that nobody will mess with the U.S., when asked the first thing he would do if elected. He added that he would increase the levels of the military to what they were at their highest because we are in such trouble.

He also said he would without a doubt have Obamacare repealed and replaced, before he added more of this controversial thoughts on the country’s illegal immigration.

When he spoke of immigration, Trump said he would make the U.S. border with Mexico stronger as people continue to pour through. He said illegal immigration was a very big thing.

He also said that his White House administration would be made up of business people not political.

His ideas, while still vague, are still the clearest ones that have been defined by Trump since he started his political campaign this past June.

The billionaire businessman, who attracted a great deal of attention due to his one liners and unusual attacks against competitors, has been criticized widely for not disclosing his specific policies.

Nevertheless, Trump has rocketed up the ladder to the top of the list in popularity in the national polls ahead of this Thursday’s first debate with the top 10 Republican candidates.

An announcement will be made on Tuesday by Fox as to what 10 candidates qualified for the debate.