Trump: I Want to be Civil in GOP Debate 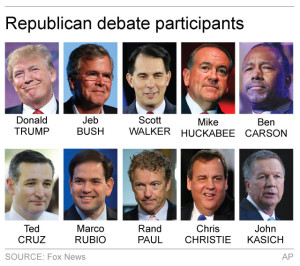 When the top 10 GOP candidates for the party’s presidential nomination take to the stage on Thursday for the first of many debates during the election campaign, all eyes will be focused on the current frontrunner Donald Trump. The Republican businessman is leading his fellow members of the GOP and winning the media war.

Trump has already released a private phone number of one candidate and has been criticized by many others for harsh rhetoric against immigrants, but the real estate mogul said he wants to keep the civil.

He said if he is attacked then he would have to do something in return, but he wants to remain civil throughout.

Lindsey Graham and Rick Perry are the two presidential candidates in the GOP that have criticized Trump the most, but both will not be a part of the debate on Thursday.

The two along with another five were relegated to an early discussion on Thursday because of poor poll numbers. They will appear at 5:00 in a forum of one hour.

Trump said he was honored that the two men most vocal against him had gone down substantially in the polls. In fact, said Trump, Graham went to zero so that makes voters fantastic in his eyes.

Trump is leading the field of GOP candidates with support of 23%, but says he will be the target at this debate. He contends his early bold statement on this campaign about immigration and the position of America in the world are not preying on the fears of voters as has been claimed by Jeb Bush one of his competitors.

Trump said that the statements he made campaigning back up his campaign theme of Make America Great Again.

He said the country was 25th in education, second overall to China in economy with third world countries that are better in education that the U.S. yet the country spends more per student than in any other country around the world.