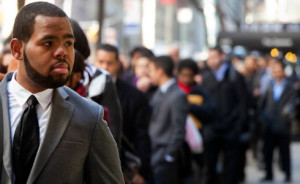 Every first Friday of the month, a report is released by the Bureau of Labor Statistics on the monthly job totals in the U.S. and the unemployment rate in the country.

In GOP circles, the rates pose some problems. President Obama and his White House agenda are supposedly causing great economic nightmares. With job creation doing so well, conservatives find themselves trying to look for new ways to discuss the issue.

Some even have said that the White House has been manipulating that data to fool the American public, while others may say there is a big difference between the current stated unemployment rates than what is the real unemployment rate.

Donald Trump during comments to Time magazine said the real rate of unemployment was likely 21%. He said it was not 6 or 5.3 or even 5.5 but much higher.

He said he saw a chart that showed 93 million people unemployed so the rate of unemployment should be 42%. Some were stunned to hear that in the same conversation the rate went from 21% to 42%.

The difference between what Trump said of 42% and the Labor Department’s Bureau of Labor Statistics 5.3% is vastly different

The 93 million people in the U.S. that Trump is referring to, in realty do not have jobs. However, the details are important. Many people that do not have jobs are teens in school or people who have retired. The Department of Labor considers those people to by unemployed for a specific reason.

The comment by Trump was likely more in jest that anything else, but underscores how comments can be made and within minutes have gone viral on the Internet as people send and comment on them to friends.

The campaign as it moves ahead will be full of these types of comments and statements that will end up all over the Internet before they are even checked out for validity.

Ardmore Shipping Co. Given Consensus Rating of “Buy” by Analysts