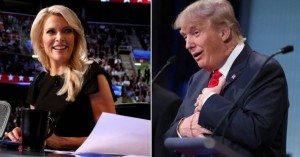 Donald Trump the current frontrunner amongst the GOP vying for the 2016 presidential nomination says he might skip the upcoming GOP debate.

Trump says that he would not be participating in the debate Thursday on Fox News after yet one more disagreement with the network over Megyn Kelly their anchor and her planned role as the debate’s moderator.

At a Tuesday night press conference, Trump said the likelihood was he would not participate in that debate, but would likely hold an event to compete with the debate while it was airing.

Trump’s campaign manager confirmed that Trump was not participating. Corey Lewandowski said Trump was definitely not taking part in the debate held by Fox News.

Lewandowski also said to reporters that the Trump campaign would hold an event in Iowa with possibly another network that would raise money for the Wounded Warriors. That he said would reduce the 24 million views of the debate to only about 2 million.

Earlier on Tuesday, Trump posted a poll on his official Twitter feed that asked his followers if he should participate in the debate. Attached to that tweet was a link to a video of Trump upset about the supposed biased Kelly has against him.

In response to the billionaire saying he would be skipping the debate, a Fox News statement mocked Trump by saying that if were elected President, Putin and the Ayatollah would not treat him fairly and the big question would if he would attend meetings with them.

Ted Cruz a fellow candidate for the GOP for the presidential nomination challenged Trump later to a debate one on one ahead of the caucuses in Iowa.

Cruz and Trump have been bantering back and forth for the last few weeks after Cruz starting moving up in the polls. Trump has questioned Cruz’s qualifications for being president since he was not born in the U.S.

However, prior candidates such as Arizona Senator John McCain were not born in the U.S. and that matter never surfaced during his loss to now President Barack Obama.