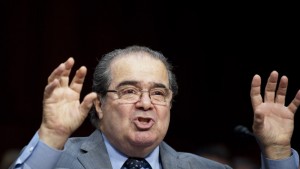 Supreme Court Justice Antonin Scalia’s death has put a topic that was second-tier into the spotlight of the presidential campaign as amongst the first acts of the new president will likely be nominating a new justice who would determine the balance of power in the Supreme Court.

Potential openings on the court have not been part of the top-tier talks in the presidential debates and voters have not raised it very often, aside from one suggesting that if elected Hillary Clinton would appoint President Obama.

However, the death of Scalia changes that. If vaults into prominence a choice which will determine the course of the country on abortion, voting rights, immigration, the environment, campaign finance and more contentious issues.

Battle lines were already drawn just minutes after the announcement of Scalia’s death, Obama promising to nominate a successor and Mitch McConnell the Majority Leader of the Senate, who controls the scheduling and confirmation of the nominee, saying the chamber would not take up the appointment during the 11 months that remain in Obama’s second term.

Republican candidates for the presidency immediately supported McConnell, while Democrats vehemently objected, arguing that selecting a new justice was the job of Obama, a deciding in a prompt fashion was the Senate’s.

The ramifications politically are many. The Democrats and the Republicans will both have a new issue to rally voters who might have considered the court until now as secondary.

Obama is going to have a chance to appoint a nominee who might influence the political races by appealing to one specific group, even if the nominee is not confirmed.

Candidates in hot race for the Senate will be asked how they are going to vote on the pick by Obama since those elections are what will determine who is in control of the confirmation process next year.

One non-partisan political analyst said that maybe the vacancy in the Supreme Court would remind everyone that a presidential election is not a circus and the stakes just increased and everyone knows that.