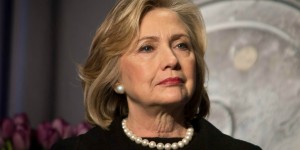 Presidential candidate Hillary Clinton spoke at two black churches in Tennessee on Sunday, vowing to “tackle the continuing challenge of systemic racism.” She was in the state meeting constituents before the important Super Tuesday primaries, where eleven states will cast their votes for their preferred presidential nominee. During her visit to the state, she also visited the historically black Meharry Medical College and toured Nashville’s funky Hillsboro Village neighborhood.

At the Greater Imani Cathedral of Faith, many congregants were dressed in traditional African garb to celebrate the final days of Black History Month. During the Sunday service at the church, Clinton said, “America has never stopped being great. Our task is to make America whole.” Later, she told the Mississippi Boulevard Christian Church, “We have to start treating each other with respect, listening to each other, holding out hands, a fellowship to make sure we know we believe we are all in this together.” Her words were rewarded with standing ovations.

Her warm welcome in the African-American community this weekend was in stark contrast to what was going on with her Republican rival, Donald Trump. Mr. Trump spent his Sunday morning fielding questions about David Duke, the white nationalist and former Ku Klux Klansman. Mr. Duke endorsed Trump on a radio program, telling listeners that voting against Mr. Trump was “treason to your heritage.” Mr. Trump faced criticism from both his Republican and Democratic rivals after he repeatedly declined to disavow Mr. Duke’s support in a CNN interview.

On Saturday, Hillary Clinton won an overwhelming victory in the South Carolina primary, buoyed by black voters. According to polls, she captured nearly 74 percent of the black vote in South Carolina. Mrs. Clinton is hoping that the support will continue and propel her to victories against Senator Bernie Sanders in Tennessee, Georgia, Alabama and other Southern states that have Democratic contests on Tuesday.