Ben Carson Sees No Path Ahead and Ends Candidacy 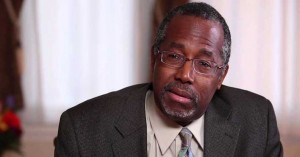 Ben Carson the retired neurosurgeon and only Republican to at one time threaten Donald Trump’s lead in national polls announced on Wednesday that he did not see any path forward and would skip Thursday’s debate in Detroit, his hometown, signaling that his candidacy has ended after poor results in the nominating primaries and caucuses.

Dr. Carson did not come out and say his campaign was suspended and said he would give more details Friday. However, after his poor showing this past Tuesday, his campaign is all but over.

Carson is a retired pediatric brain surgeon and has long held favor of Republicans with his uplifting biography and a quiet manner that belied the strafing critiques he held for President Barack Obama and liberalism that delighted so many conservatives.

However, Carson has withered under the insults Trump has hurled his way, especially in Iowa and suffered from the desire of voters for a candidate that projects strength during a time of worry over terrorism.

Following a poor showing at the caucuses in Iowa, Carson could not seem to regain footing. Super Tuesday he hoped for a strong performance across the south but faltered and was either fourth or fifth in each state.

Even during a year that was fiercely anti-establishment, Carson’s months of prodigious support and popularity from small donors, his $20 million raised during the summer led all candidates and stunned experts.

Born into extreme poverty and raised by a mother who was single, with just a third grade education, Carson remade himself changing his ways from a wayward teen into a scholar.

He won admission to Yale and at 33 was leading a big department at John Hopkins Hospital.

He burst into politics in 2013 with his criticism of the Affordable Care Act during the National Prayer Breakfast.

In the end, questions over his grasp of U.S. foreign policy are what eroded the confidence of both voters and donors.