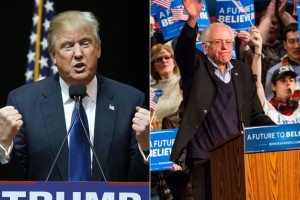 Donald Trump was an easy winner against his rivals from the Republican Party in the Mississippi and Michigan primaries on Tuesday and was victorious in the Hawaii caucuses. This helped the Republican frontrunner regain some momentum as resistance has intensified towards his campaign amongst party leaders.

Bernie Sanders the U.S. Senator from Vermont was an upset winner in the Democratic primary in Michigan threatening to extend a campaign that appeared to be locked up by Hillary Clinton.

Clinton was beaten badly amongst independents in Michigan, which showed a continued weakness she has within the white, working class Democrats, and could not count on the advantage within the black votes like she did across the south.

In Miami, speaking to reporters, while the Michigan votes were still uncounted, Sanders said his powerful showing was an indication the political revolution was strong in all parts of the U.S.

While helping Sanders as the race turns to a number of larger states during next week, his victory in Michigan failed to dent the delegate lead of Clinton, as she was an overwhelming winner in Mississippi and netted more overall delegates on the night.

Ted Cruz the Texas Senator was the easy winner in Idaho in the Republican primary, which helped to mitigate his runner up finishes in both Mississippi and Michigan.

After losses in Maine and Kansas on Saturday to Cruz, Trump needed a great performance to tamp down the doubts over his candidacy following a week of missteps, gaffes and questions over the strength of his organization.

His appeal with the working class white voter was on full display in Michigan, a state Trump said he would win during a general election, while fighting back challenges from John Kasich the Ohio Governor and Cruz in Mississippi.

Trump plugged a number of his business interests during his victory speech as he said he won despite what he described millions of dollars that was spent in horrible lies in the negative ads from rivals.

Clinton did not make any mention of Michigan or Mississippi results while talking to supporters late Monday, instead she alluded to the vitriol of the Republican field.