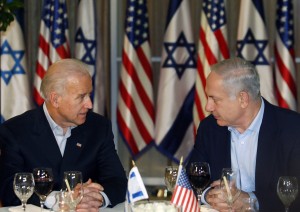 United States Vice President Joseph Biden arrives Tuesday in Israel to again patch up the relations between the White House and Benjamin Netanyahu the Prime Minister after a deeply partisan and very public spat over the nuclear deal in Iran last year.

Biden will meet Netanyahu on Wednesday in Jerusalem when they will work to advance the long running discussions between Netanyahu’s office and the White House over a new 10-year, multibillion military aid package.

This trip also is the start of a last lap for the vice president, who Israelis have always embraced as a staunch supporter and friend during his many years as a senator and now eight years in the White House.

As for the President, Israelis have been “meh,” a feeling stoked by the aggressive opposition by Netanyahu to the Iran deal supported by Obama.

Biden was in Israel briefly in 2014 for the funeral of Ariel Sharon the former Israeli Prime Minister.

This trip is the first state visit by Biden to Israel since a 2010 diplomatic disaster when Israel made the announcement during his trip of new plans for construction in Jewish settlements within East Jerusalem, which are the same settlements that successive administrations in the White House have called illegitimate and obstacles to a peace accord with the Palestinians.

Israelis have promised nothing similar will take place on this trip by Biden, where the vice president will not just talk about military aid but regional stability with Israel. He will sit down with Mahmoud Abbas the President of the Palestinian Authority.

The Palestinian youth have carried out a wave of violence the past five months with vehicular, gun and knife attacks against soldiers in the Israeli Defense Forces as well as civilians.

Biden will meet with Jordan’s King Abdullah II on Thursday in Jordan.

The Israeli defense establishment and the White House have held high-level talks that have been closely guarded for months over the amount the U.S. will be giving Israel in military aid.