Tuesday Primaries Are Make Or Break For Two Candidates 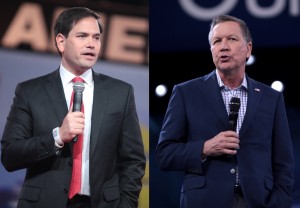 In the presidential primaries being held on Tuesday, Florida, Illinois, Ohio and Missouri will distribute their 286 delegates to the candidates most preferred by their residents. In Florida and Ohio, the candidate that wins in the state gets all of the delegates. This makes these states make or break for Ohio Governor John Kasich and Florida Senator Marco Rubio. If Kasich were to lose Ohio and if Rubio loses Florida, they may as well suspend their campaigns.

It doesn’t appear that Kasich has much to worry about at the moment. Most polls have him with a decent lead over his competitors in the state. The same cannot be said for Rubio’s chances of winning Florida. Florida looks as if it could be a complete disaster, with Rubio at risk of a third place in the race. Both also need to do well in Illinois, which has more total delegates than are available in Ohio.

Both candidates need to show strength against the insurgent campaign of current frontrunner Donald Trump. Unfortunately for them, Trump’s support is consistently much more solid than any of his opponents. About three-quarters of Trump supporters in Florida say they back him strongly, much higher than the combined number of Rubio backers who say they strongly support him, or sort of support him. Even if Trump were to lose his non-strong support in the state, he would still be able to beat Rubio in the primary.

Donald Trump has appeared to pivot his campaign from focusing on his Republican rivals to focus on his potential Democratic opponents for the presidency. During a campaign event in central Illinois on Sunday, Trump blamed his cancellation of a rally at the University of Illinois campus in Chicago on Sen. Bernie Sanders’s supporters. He told the audience that the Chicago event was postponed after local law enforcement suggested the thousands of people outside the venue posed a threat. However, late Friday the Chicago Police Department released a statement saying that the decision was exclusively made by the Trump campaign.