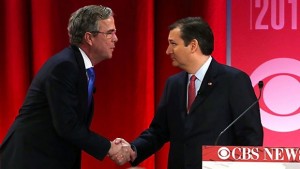 Former Republican candidate Jeb Bush announced that he was endorsing Ted Cruz for the GOP presidential nomination saying that U.S. Senator Cruz from Texas represents the best chance for the party to win the White House.

In prepared statement, the former governor of Florida called Cruz a principled, consistent conservative who demonstrated his ability to appeal to the voter and to win primaries.

Bush added that Washington is now broken and the only way the Republicans have a hope at winning the White House back and putting the nation on the way to a better path is supporting a nominee who is able to articulate that conservative policies will help people to rise and reach their complete potential.

Bush, who is 63, whose father as well as brother served as the country’s president, left the race back on February 20, following a big loss in South Carolina.

This endorsement by Bush comes as the establishment Republicans are scrambling to stop Donald Trump the front running from winning the party’s nomination because of how divisive his proposals are such as deporting over 11 million undocumented immigrants.

Cruz has been running second behind Trump and could win enough delegates conceivably to take the Republican nomination.

John Kasich the Governor of Ohio has only one path to the party’s nomination and that is to extend the race until the party’s July national convention.

The idea would be to deny frontrunner Trump from receiving the required number of delegates of 1,237 needed and that would force the party leaders into considering another candidate.

A source that is close to former governor Bush said he endorsed Cruz because he believes he has the most viable path to the GOP nomination and has shown an ability to win primaries.

That same source said that Bush considers a contested convention push is a Hail-Mary strategy at its best.

Bush also has resumed criticizing Trump, saying that Republican voters need to now move to overcome the vulgarity and divisiveness that Trump has brought to the political arena or the chance will be lost to defeat the nominee for the Democrats and reverse the failed polices of President Obama.