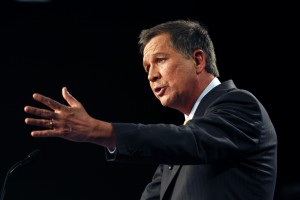 Despite repeated calls from prominent members of the Republican Party to drop out of the race for president, Ohio Governor John Kasich has reiterated his commitment to stay in the contest for the long haul. His advisers are claiming that the race’s final stretch of 20 states put Mr. Kasich in a far stronger position than Ted Cruz to halt Donald Trump, the current frontrunner. The next stretch of contests occur mostly in the Northeast, Middle Atlantic and the West Coast, where moderate Republicans dominate.

To date, Mr. Kasich has only won one contest, in his home state of Ohio. In the Northeast, he nearly beat Mr. Trump in Vermont, and came in second to him in Massachusetts and New Hampshire. Mr. Kasich campaigned Wednesday in Wisconsin, a Midwest industrial state similar to Ohio, where he feels he will have a strong showing. The next Republican primary will be held there on April 5.

Mr. Kasich is mathematically unable to win a majority of delegates before the last primaries, on June 7. 1,237 is widely touted as the number of delegates needed to clinch the Republican nomination before the July convention. As of Tuesday’s voting, Donald Trump had 739 delegates, Ted Cruz had 465 and Mr. Kasich had 143.

Ted Cruz called John Kasich the complicating factor in his potential defeat of Donald Trump. Mr. Cruz said, “If this were a head-to-head race, a direct head-to-head race between me and Donald, I would feel very confident that we would get to.” He continued, “It is unclear if Kasich will bleed off just enough votes to give Trump victories and delegates in states he would not otherwise have won.”

Mr. Kasich’s only hope of securing the Republican nomination for president is for Trump to arrive in Cleveland lacking enough delegates for a first-ballot nomination. In a contested convention, he might secure the nomination by being the only Republican nominee with a chance of winning the White House in November. A recent poll published in The New York Times showed Mr. Kasich holding an advantage over Hillary Clinton, with Mr. Trump losing a general election contest to her by 10 points and Mr. Cruz falling failing by a narrower margin. However, current rules state that candidates must win a majority of delegates from eight states to be on the ballot in Cleveland, which would knock Mr. Kasich out of contention.