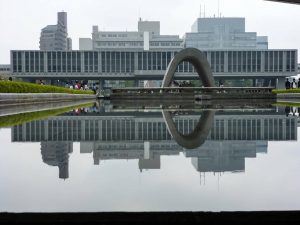 President Obama became the first sitting U.S. president to visit Hiroshima, Japan on Friday, 71 years after the world’s first atomic strike demolished the city during WWII. In a solemn visit, the president offered his respects to the victims of the first deployed atomic bomb. An estimated 140,000 were killed during the bombing on Aug. 6, 1945, and its aftermath. Three days later in 1945, a second U.S. atomic bomb in Nagasaki killed a total of 80,000. Japan surrendered a week later.

On Friday, people lined streets as Obama’s motorcade entered the city. His first stop was to visit the Hiroshima Peace Memorial Museum and sign the guest book. Along with his signature, he wrote a call for the courage to “spread peace and pursue a world without nuclear weapons.”

The next stop was to the curved, concrete cenotaph that pays tribute to the dead with an eternal flame burning just beyond it. Obama was handed a wreath to lay on a stand in front of the cenotaph. After laying the wreath, the American president bowed his head and stood silently for a minute. Japanese Prime Minister Shinzo Abe, who also attended the ceremony, then did the same.

In remarks concluding the ceremony, the president called for nations to reconsider the development of nuclear weapons and to roll back and “ultimately eliminate” them. He then met with two survivors of the bombings, Sunao Tsuboi and Shigeaki Mori. Many Japanese have longed for an American leader to acknowledge the suffering of the victims. Some had tears in their eyes as they watched the ceremony on their cellphones.

Before the ceremony at the Peace Memorial Museum, Obama visited the Marine Corps Air Station in Iwakuni, roughly 25 miles south of Hiroshima. There, he spoke to a group of U.S. and Japanese troops who work side-by-side at the base. In his statement, he declared that the Iwakuni base “is a powerful example of the trust and the cooperation and the friendship between the United States and Japan.”

Previous U.S. presidents had avoided visiting Hiroshima, not wanting to project that they were apologizing for President Harry Truman’s decision to authorize the bombings. However, Obama and his advisers believed the time was right to highlight the partnership between the two nations and speak about the dangers of modern nuclear weapons. Obama made clear in his remarks that while all sides suffered in the war, all sides also bear responsibility for the horrors that occurred.

Vahanna Tech Edge Acquisition I Corp.’s Lock-Up Period Will End on May 23rd