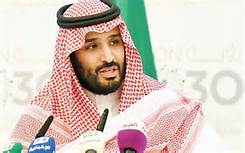 Officials in Saudi Arabia have finalized their detailed plan for the kingdom’s economic diversity, in an attempt to move from oil dependence and have sent the plan to be approved by the cabinet said officials earlier this week.

The NTP or National Transformation Program will carry out Vision 2030 a document of 84 pages released during April by the Deputy Crown Prince Mohammed bin Salman who will be in charge of the reforms.

The center of this plan is floating less than 5% of the Saudi Aramco the state’s oil firm on the stock market. Those proceeds would be part of the largest investment fund in the world with $2 trillion worth of assets.

Profits received via the investment fund are to help the diversification of the economy and to provide alternatives to revenues from oil that have fallen by nearly 50% since 2014.

The collapse acted to accelerate the efforts of the Saudi’s to move somewhat away from oil, which still represents the bulk of the income the government generates.

The main coordinating body regarding the economy, the Council of Economic Development and Affairs that Prince Mohammed chairs, decided earlier this week to submit the NTP’s final version to the government’s cabinet for its approval.

The plan was approved on Monday and announced at Jeddah the city on the Red City and the government’s summer home.

Vision 2030 says that the NTP is the role of the government in implementing initiatives that are necessary for delivery of national priorities.

It said that opportunities for partnering with members of the private sector were under consideration, as well as funding and innovative administrative approaches.

Amongst its goals that are wide ranging, the plan hopes to reduce the kingdom’s rate of unemployment, increase participation of women in the nation’s workforce and develop entertainment and cultural activities across the kingdom.

Saudi Arabia is one of the most conservative societies in the world, but over half its population of citizens is 25 year old or younger.

The drop in oil prices since mid 2014 have forced a number of countries in the Gulf and Northern Africa to implement change in their economies or face problems with their own budgets and not being able to pay their debt.

Saudi Arabia remains the world’s largest producer of crude and the leader of OPEC.