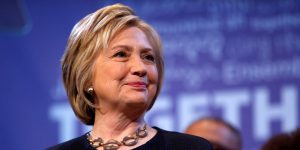 Hillary Clinton has won enough delegates to win the presidential nomination for the Democratic Party according to a report released by the AP.

Clinton has emerged from a long, bruising battle during primary season to become just the first women to lead one of the country’s two major parties in a race for the White House.

A bitter battle for the nomination that at one time Clinton was expected to easily win ended abruptly on Monday when she claimed the exact number of overall delegates need for her to secure her party’s nomination over Senator Bernie Sanders from Vermont.

Clinton was expected, even within her campaign, to clinch the party’s nomination Tuesday when New Jersey, California and four more states vote in their primary.

However, according to a report by the AP, Clinton picked up commitments over this past weekend from super-delegates and Monday the gains in delegates effectively guaranteed her, her party’s nomination.

With the milestone, the former first lady of the U.S., U.S. Senator as well as secretary of state, ended over two centuries of history in the U.S. in which just men have been the standard bearers for the major parties.

Clinton overcame a crushing defeat in 2008 to Barack Obama for the Democratic nomination and a political environment giving outsiders an advantage over the establishment credentials of Clinton.

She is also the first spouse of an ex-president to win the nomination of her party for the White House.

Clinton said that her supports were passionate, committed and voted for her in large numbers across the U.S.

Clinton will now turn her full attention to her opponent Donald Trump the Republican presidential nominee for the general election in November.

Last week she “unofficially” started her presidential campaign against Trump with a speech on foreign policy that shredded the qualifications of Trump as well as his temperament.

The attacks continued over the weekend at her appearances across California and her supporters have received them with enthusiasm.

Clinton faced an unexpected strong and contentious battle from her party rival Sanders. There is a possibility the senator will continue to battle her even though she effectively won her party’s nomination.

On Monday, a statement was issued by Sanders that said it was unfortunate members of the media were rushing to judgment having ignored the clear statement by the Democratic National Committee that it is wrong counting the votes of super-delegates prior to them voting during the summer at the convention.